HHere is an easy way to find out how long someone has lived in Charlotte: Take them to 1315 East Blvd., at the corner of East Boulevard and Scott Avenue, and see how many old restaurants they can name.

When the Latta Pavilion opened in 2003, Red Star Tavern had the main plaza facing the corner. With over 8,000 square feet, 400 seats, and hard-to-find parking for customers, it lasted about 18 months. A French restaurant called Patou followed. It closed in 2007 after less than three years. Since then, they have been 131 Main, The Rogue, The People’s Market and Red@28th, among others.

Walk down the street a few blocks to 1511 East Blvd.: Peking Palace, Sunset Bar & Grill, and Southern Comforts all occupied this space. Baxter’s Blue Marlin did this for eight years, from 1993 to 2001. Cantina 1511 was there for 10 years, taking the “1511” to several new locations, including one at the Park Road Shopping Center. Babalu followed in 2016 and closed two years later to move to Waverly. Today the address is a Fifth Third Bank.

It’s a favorite discussion table for restaurant watchers: why do some places seem to run more often than a cold engine in January?

“Sometimes there’s just no rhyme or reason,” says Sherman Walters of National Restaurant Properties, which has offices in Charlotte and Greenville, South Carolina. “Traffic and visibility were important,” he adds, but with social media generating excitement, “I can show you a dozen restaurants that break all the rules, and they always succeed.”

Walters makes several calculations when helping restaurateurs find spaces, and one is a location that matches the menu. Failing operators often did not understand market demands or the prices nearby residents would pay. A recent example: a franchise biscuit shop that closed after only two years. Although the business cited COVID restrictions, it was also located in the body-conscious South End, surrounded by yoga studios and fitness centres. A menu high in carbohydrates may be in the wrong place.

“That’s the mistake a lot of operators make,” says Walters. “It might tick all the boxes, but what is the menu? What is the community looking for?”

Ssometimes the size is to blame. When Patou moved from a successful 100-seat location on Park Road to a 300-seat space at 1315 East Blvd., he lost the intimacy of the classic French bistro and he struggled to fill that many tables.

Too many seats can be as bad as not enough, says Walters. “You would much rather have a 20-seat that gets six rounds” – the number of times a table is filled in a party – “than a 60-seat that gets two rounds.” If the tables are filled only twice a night, the prices must be higher to make a profit.

Here’s another example: Paul Verica, two-time James Beard semi-finalist and owner of the now closed The Stanley in Elizabeth, opened Orto, an Italian restaurant, in early 2021. He loved the location of Novel NoDa, a mixed-use development that places it just steps from the 36th Street station of the LYNX Blue Line. Although it wasn’t directly on North Davidson Street, there was a lot of foot traffic.

But Verica faced eight months of construction delays, during which he still had to pay rent. Some of the nearby apartment projects weren’t finished when it opened, adding to the noise pollution. And its ambitious Italian menu was perhaps not suited to the region.

“That menu at the Stanley, it might have suited the neighborhood,” Verica says. “NoDa is a great neighborhood, but maybe (Orto) wasn’t the best choice. It could have been more laid back. Orto closed after less than a year.

In May, Verica announced the sale of The Stanley after four years in the 2,800 square foot space at Seventh Street and Pecan Avenue. Unlike Orto, the decision to close The Stanley was Verica’s choice. In an open letter on social media, he highlighted the impact of the pandemic on the culinary industry but declined to say who bought The Stanley or what they will do with the space.

“A small misstep in this business can be very costly,” says Walters. “This is where a (real estate) broker and an operator must work together. You need to have a clear idea of ​​what the menu looks like and how much it costs. »

Aaron Ligon has his own formula for location success: accessibility, visibility, signage and traffic. “These will never change,” says Ligon, co-founder of Ascent Real Estate Partners, which works with a number of Charlotte restaurants. “If your space is inferior in any of these ways, you will always be understaffed.” Ligon always places great importance on visibility – customers need to see a restaurant if they want to remember to visit it regularly.

National brands tend to prioritize accessibility. For example, Starbucks and Dunkin’ want to be on the right side of the street for morning commuters. No one wants to make two lefts at rush hour to grab a sandwich or coffee for breakfast. A restaurant on the wrong side of the street is a closed restaurant waiting to arrive.

Even neighborhoods that seem to have it all can struggle, Ligon says. In the South End, for example, many restaurants are located in apartment buildings. On paper, it looks great. You have a lot of street traffic and customers who live within walking distance. It doesn’t always work that way, however.

“If it’s not carefully designed, that’s a problem,” says Ligon. “If it’s difficult to take deliveries (of supplies), to take out the trash, to clean the ventilation hoods, it costs money every day. Being in a building with 300 inhabitants can do more harm than good. A novice will think this is a bigger help than it is. People don’t eat at the same place every day, unless it’s a cafe or something you’ll be using every day. Rain, cold, or heat can impede pedestrian traffic on the sidewalks, and if there’s no parking, drivers will also pass you.

Even with a large parking lot, drivers will stay away if it is too difficult to enter or exit the parking lot. Jon Dressler, owner of Rare Roots Hospitality, is one of Charlotte’s most successful restaurateurs, with two Dressler locations as well as The Porter’s House, Dogwood Southern Table & Bar, and Fin & Fino.

One of the first things Dressler looks for in a potential location is “entry and exit,” or how you enter and exit the parking lot. If there are eight inputs and outputs, at least seven should work for your customers. Dogwood, for example, is in Sharon Square, near SouthPark Mall. There are four entrances and three exits as you cannot turn left onto Sharon Road. With street parking and parking on top of that, it lasted eight years.

Dressler has just announced a new concept, Chapter 6, which is due to open in November at The Line in the South End, a 16-storey mixed-use development. This is the kind of sites he likes: shopping centers or mixed use with a combination of residences and businesses, or businesses and offices. He doesn’t care how many other restaurants are around. “I like to try not to be the only draw,” he says. “You may get turned on by my neighbor, but after eating there 13 or 14 times you’ll be like, ‘Let’s go check out that other place tonight. “”

Accessible (and cheap) parking was once a staple in Charlotte, but Dressler thinks that’s changing. “Older people want to be able to park out front and walk in,” he says. But for restaurants that target a younger clientele, that’s not a priority, thanks to on-demand ride services like Uber.

At Fin & Fino, Dressler initially offered complimentary valet parking for customers who were concerned about scarce and expensive uptown parking. But once he realized the service averaged two cars a night on weeknights and eight on weekends, he cut it. Most people used Uber or Lyft, or they lived or worked within walking distance. 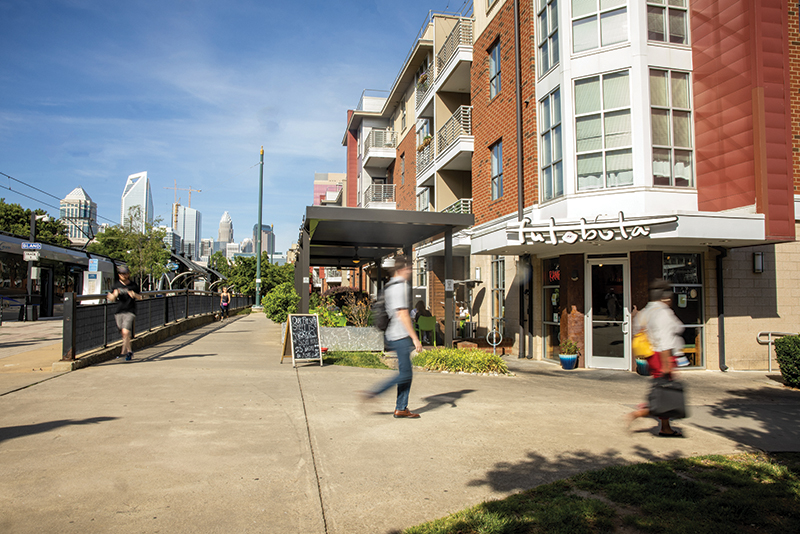 Futo Buta, next to the light rail tracks at East Bland Street, benefits from foot traffic on the Rail Trail.

Ligon thinks parking will matter as long as enough Charlotte residents are driving. “Anyway, ease of access, ease of parking is at the heart of what makes a reasonable dining experience,” he says. “There are only so many times a customer is going to go around in circles a lot.”

Dressler pays great attention to urban growth. When he opened Fin & Fino in 2018 in the space that had been E2 Emeril’s Eatery, this end of South Tryon Street was a no man’s land of parking lots and construction. But soon it was surrounded by office towers that included condos and retail businesses. Now that the downtown offices are reopening, Fin & Fino is also open for lunch. “I always tell people that I’m not the visionary,” he says. “It’s understanding the makeup of the city.”

Everyone is guessing how the pandemic will change the realities of restaurants as people get back to normal life. Quick parking for food delivery services will likely be the norm for a long time.

“From what we’ve seen, a couple of things have become more important,” Ligon says. “The take-out window, as well as the ease of access and take-out parking. Meal delivery systems, like Uber Eats, need to be efficient. »

A bad location does not always prevent a good restaurant. Dressler shows off Futo Buta, the famous South End ramen house. It’s tucked away behind a mixed-use complex, out of sight of South Boulevard. “The first two times I tried to go there, I couldn’t find it,” he says. “But they are always busy.” The ramen, steamed buns, and veggie small plates are affordable and filling, the decor is sleek and cool, and there’s plenty of foot traffic on the Rail Trail next to the Lynx light rail tracks.

Walters remembers something his mentor, National Restaurant Properties founder Bob Dowdy said, “’Sherman, you can’t hide good food. If the food is good, people will find you. And that rings as true today as ever.

KATHLEEN PURVIS is a longtime Charlotte-based writer who covers Southern cuisine and culture.